Congrats on the iPad 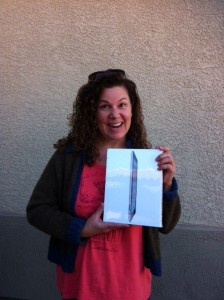 Jill from Las Vegas, Nevada was the winner of our iPad drawing. We hope her new iPad will continue to help her list and rent items on ShareTown.com.

A big thanks to all who have helped us beta test. We appreciate your insight and suggestions. Please continue to give us feedback, as we’re always trying to give you the best user experience possible.
Posted by ShareTown Admin at 4:13 PM No comments:

And the Winner is…

…Jill, from Las Vegas, Nevada. Congratulations Jill! It will be delivered shortly. Thank you to all who have participated, we appreciate your feedback. Please keep on sharing!
Posted by ShareTown Admin at 4:11 PM No comments:

Win an iPad from ShareTown

Hello, and welcome to ShareTown. We’re currently in beta and would love your help testing our site and in return for helping us we’re offering one lucky person a free iPad. All you have to do is:
You can post almost anything, but here’s a few ideas of items you could post for rent on our site: bicycles, rotor tiller, lawnmower, golf clubs, sewing machine, baby gear, electronics, etc. You have until the November Fifteenth to participate. Thank you for your help!
Posted by ShareTown Admin at 3:59 PM 4 comments:

With ride-sharing being a major portion of the current collaborative consumption market place, Insurance coverage has been a major question. TechCrunch looks at Lyft’s new excess liability insurance of $1 million for every driver that transports passengers booked through it’s website.

Collaborative Consumption: An Idea to Change the World

Today on SAcommercialpropNews the article “One of the Top Ten ideas that will change the World” explains the draw of collaborative consumption and how because of technology it is now scaleable to make it a viable solution in local economies through out the world.

“Collaborative Consumption is all about sharing, bartering, lending, trading, renting, gifting, and swapping of all kinds of assets, from spaces to skills to cars. It has exploded onto the scene through network technologies that allow for these more traditional ways of economic exchange to take place on a scale and in ways never possible before.

Why buy when you can rent?  Or swap?  Or share?  Want to go on holiday but can’t afford it? Why not consider a house swop?  Or how about swopping books, CD’s and DVD’s with friends? Perhaps you need to hang pictures in your home – rather than rushing out and buying a power drill, rather borrow your neighbours or rent one. And when the time comes to start a family, consider renting your baby equipment for the short period of time that it is needed.

These are a just a few of the many ways that people are starting to change their consumer behaviour. The 20th century has seen us churning out mass produced consumer goods such as laptops, cell phones, TV’s, cars etc. – we are a society of consumers – but people are being driven through a combination of recessionary thrift and a growing consciousness of what we are doing to our planet to reduce the amount of ‘stuff’ that we own. Sharing and renting more stuff means producing and wasting less stuff, which is good for the planet and is also a perfect fit for an urban lifestyle in which you have lots of neighbours and limited storage.”

Posted by ShareTown Admin at 3:56 PM No comments:

Time.com featured “10 Ideas That Will Change the World”, and one of them was Collaborative Consumption. In Bryan Walsh’s article “Today’s Smart Choice: Don’t Own. Share”, he says it’s the younger generation who is pioneering the way to “renting, lending, and even sharing goods instead of buying”. He goes on to assert that there is more to the economic benefits to sharing goods, but there are community benefits as well.

“But the real benefit of collaborative consumption turns out to be social. In an era when families are scattered and we may not know the people down the street, sharing things — even with strangers we’ve just met online — allows us to make meaningful connections…

We yearn to trust and be trusted — one researcher has found that people get a spike of the pleasant neurotransmitter oxytocin when they’re entrusted with another’s goods. That’s the beauty of a sharing society — and perhaps the reason it might prove more lasting than one built on ownership.”

Posted by ShareTown Admin at 3:55 PM No comments:

USnews.com reports that collaborative consumption is the cornerstone of the new economy.

The Rise of the Collaborative Consumption Economy
By  David Brodwin

‘…Collaborative consumption is a cornerstone of the new  economy. It  challenges the old economy  idea that corporations must own the assets  they need to make things and provide  services. Instead, it encourages  ownership to be widely distributed.

Collaborative consumption applies both to physical assets  and human  assets. Physical assets like  homes and cars are sometimes vastly  underutilized. This value can be tapped to generate cash for  owners and  offer lower prices for renters. Collaborative consumption also applies  to people-powered services,  particular when specialized knowledge and  skills are involved. You may want to learn French and I may need  help  with my taxes. But neither of us  wants to become a full-time teacher or  consultant…’

Posted by ShareTown Admin at 3:54 PM No comments:

Yahoo! Finance speaks of the new generation of sharing and how it will cultivate a new economic landscape.

‘…”This is a generation that is scared of commitment, wants to be light on their feet and needs to adjust to whatever happens,” said Zukin, who’s researched the effects of the recession on recent college graduates. “What once was seen as a solid investment, like a house or a car, is now seen as a ball and chain with a lot of risk to it.”

One key difference is that technology now allows companies to provide younger consumers access to what they want, when they want it and at a reduced cost, said Paco Underhill, founder of New York-based consumer-behavior research and consulting firm Envirosell.

“Renting is something that is in play that wasn’t in play during the Great Depression,” he said. “To a modern generation, ownership isn’t about having it forever, it is about having it when you need to have it,” said Underhill, who has studied shopper behavior… ‘

Posted by ShareTown Admin at 3:52 PM No comments:

This article apeared today on The Sharing Engine:

Three interesting companies every startup should pay attention to


Posted on August 1, 2012 by lisa
If your thinking of starting your own peer-to-peer sharing site, make sure you are up to date on the latest trends. As more and more people are connected through the Internet, you need to make sure you can deliver quality as promised. Our first company on the list will challenge your startups reputation, but with the right game plan you will be just fine.

“Public Demand”
Public demand calls them self the “Social Better Business Bureau”. It’s similar to “Causes” and lets users write reports on something that’s bothering them about a company, and then allows other people to hop on the bandwagon.
It is like a structured petition site. Customers can share a story and connect with people who have experienced the same thing, rather than simply complaining on Twitter, where tweets go to die.
So, in the area of the sharing economy and the collaborative consumption, make sure to keep your users happy to make your business afloat.

So far so good? To grow you your business further you need to attract customers and clients. One of the biggest problems for many startups is to know which customers to use money, and resources on. Sqoot is making this process really easy, and will help you to focus your attention the “right” places.

“Sqoot”
The idea behind Sqoot is that more companies are selling digital goods and services to businesses these days. But how can your company know if for example a coffee shop is savvy enough to understand what you’re selling? Sqoot jumps in to give the coffee shop a rating between 1-100 on how savvy the business is.
If the company has a Twitter account and Facebook page, they’d get a higher rating than someone with only a simple website. This will help your business locate the tech friendly companies who may be open to new and interesting solutions.

The last company in this article will help you improve your coworkers information sharing. You probably use Dropbox already, which is really easy. The only problem is that there´s no real way to take notes on the files that you’re sharing

“Groupiter”
The company Groupiter lets you create “change logs” on the fly that pop up an update to those who are parts of a shared folder on Dropbox. This helps you to make sure that everything is up to date. Imagine how much time that could be saved by eliminating conversations around updates on files!

These three companies are interesting because they will help your business in three important ways: “PublicDemand” forces you to constantly think of the customer value, “Sqoot” helps you narrow dawn the list of potential clients, and “Gropiter” improves the internal workflow in your company.

Posted by ShareTown Admin at 3:50 PM No comments:

The Wall Street Journal reports that some estimate that the collaborative consumption industry could be worth as much as $100 billion.

In the article by Ben Rooney, Sharing Gains Currency on Internet, he states:

‘…How big the sector will be is anyone’s guess; estimates go as high as $100 billion. U.S. analysts Frost and Sullivan have estimated that just one sector—the car sharing industry in North America—will be worth $3.3 billion by 2016. Last year Airbnb joined the exclusive $1 billion valuation club.

Brent Hoberman of venture capital firm Profounders says this is an attractive market and one in which it has made a number of investments. “It plays in lots of trends; unused assets, people not being as materialistic, and it is also green,” he says.

Of course the idea of people sharing rides or swapping homes is nothing new; what is new is the scale the internet brings to create real companies. But that scale brings its own problems, one of which is liquidity, i.e. having enough buyers and sellers, or borrowers and lenders…”

‘…Americans with heaps of stuff, skills and time are connecting online with tech-savvy and early adopters eager to share and rent homes, cars, tools and services in exchange for deep savings.

Dubbed “collaborative consumption” — or “the sharing economy” — this movement represents the newly cemented intersection of online social networking, mobile technology, the minimalist movement and heightened penny-pinching brought on by lingering economic uncertainties…’
Posted by ShareTown Admin at 3:44 PM No comments:

ShareTown is a simple, safe, and convenient way to share or rent goods or services to family, friends, and neighbors. It allows individuals to earn extra money by renting out items they own to people who need them. ShareTown is a great alternative to ownership; it allows people to save money, make money, protect the environment, and be neighborly.